EU agricultural regions renew their call on EU policymakers to further reinforce the F&V CMO and GI schemes as well as safeguard their role in the implementation of the future CAP. 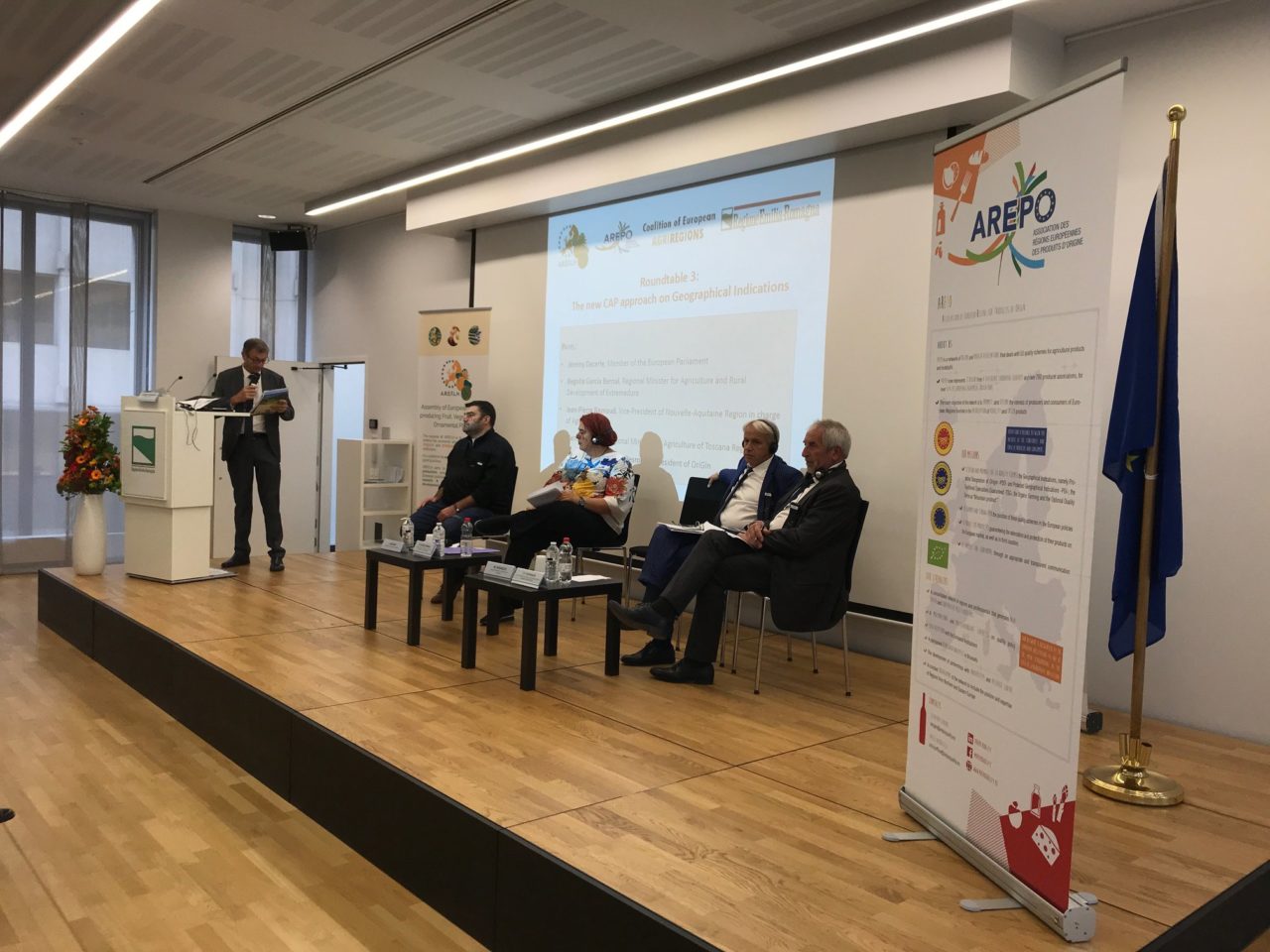 On the 17 th of October 2019, the EU networks AREFLH, AREPO and AGRIREGIONS joined forces to organize a conference on the topic “Governance, Common Market Organisation and Geographical Indications in the future CAP post 2020”. This multi-stakeholder event, which gathered over 100 participants ranging from EU and regional policymakers to representatives of professional organizations and civil society, was the opportunity to discuss the current state of play of the CAP reform and further debate the proposed amendments to the Fruit and Vegetable CMO and Quality Schemes, as well as the role of European regions as managing authorities in the future CAP.

In their opening remarks, the Presidents of AREFLH, AREPO and AGRIREGIONS took the floor to welcome the participants and briefly introduced their networks and their organisation’s views on the ongoing CAP reform.

The conference’s first session focused on the role of European regions in the future CAP. The moderator Olivier Allain, Vice-President of the Brittany Region in charge of agriculture and coordinator of AGRIREGIONS, opened the debate by recalling that regions have played a “key role in promoting and achieving the agroecological transition, the competitiveness and the attractiveness of farms and rural areas”. Stressing the importance of maintaining regional managing authorities in the future CAP, Friedlinde Gurr-Hirsch, State Secretary in the Minister for Rural Affairs and Consumer protection of Baden-Württemberg and Arnold Schuler, Provincial Councilor for Agriculture of the Autonomous Province of Bolzano-South Tyrol called for a strong second pillar with regional flexibility to address both farmers’ and consumers’ expectations at local level. For Herbert Dorfmann MEP, “it is impossible to address the many challenges faced by the European agriculture without reinforcing the role of the Regional Authorities in the management of the second pillar and that the CAP regulation should evolve in this direction”. Questioned on the environmental ambition of the CAP, Kari Valonen, SCA spokesperson at the Finnish Permanent Representation insisted on the fact that the European Green Deal cannot happen without the CAP and a strong second pillar with tailored measures tackling local environmental and climate challenges.

The second session granted the opportunity to discuss the current challenges faced by the fruit and vegetable sector. The moderator Simona Caselli, Regional Minister for Agriculture of the Emilia-Romagna region and President of AREFLH, asked the attending speakers to share their views on how Producer Organisation and the F&V scheme can be further reinforced. Clara Aguilera MEP recalled that the F&V CMO has proven to be a successful and cost-effective tool that needs to be further  consolidated through a better concentration of the supply, a crucial step if we wish to strengthen the position of farmers in the food supply chain. Questioned on how Producer Organisations can make the most out of the currently available risk management and prevention tools under the F&V CMO scheme, Jean-Louis Moulon, President of AREFLH’s College of Producers and Luc Vanoirbeek, President of the F&V working group of Copa Cogeca, focused on the threats posed by climate change and phytosanitary emergencies, emphasizing that the CMO is indeed a remarkable tool but cannot be considered to be as the solution for all problems: the F&V sector still requires a broader support from other CAP mechanisms. Finally, the chair also queried the speakers on the crucial need to address trade and R&D policies in the F&V sector: Maria Teresa Cháfer Nácher, Director-General for Agriculture of the Valencia Region stressed the need to review the current European trade policy to ensure that EU farmers are able to compete on a level playing field with producers from third countries and advocated for more funds dedicated to research and innovation in the F&V sector. In her concluding remarks, Simona Caselli stated that “The F&V CMO has repeatedly proved itself as an incredibly successful tool that needs to be preserved and bolstered in the future CAP. There is however a pressing need to reinforce its crisis prevention and management tools in order to better face the challenges posed by climate change and phytosanitary emergencies”.

The third and last session focused on the place of Geographical Indications (GIs) in the future CAP framework. Claude Vermot-Desroches, President of OriGIn moderated the round table. He set forth AREPO and OriGIn common demands under the new CAP as well as the main results achieved in assuring the right support to GI under rural development and strengthening their protection in quality regulation. Jérémy Decerle MEP co-shadow rapporteur on the Amending Regulation, reminded that the newly elected European Parliament will strengthen the work initiated by the past legislation concerning GIs. “The EU should bring back its agriculture to a central stage and GIs can help in this process”. Speakers, prompted by the moderator, remarked the importance of geographical indications for their regions and producers, in terms of economic and rural development and competitiveness. Particularly, Begoña García Bernal, Regional Minister for Agriculture and Rural Development of Extremadura, stated that we should simplify the access to GI system for small producers, without threatening the specific characteristics that define its unique quality, namely the human factor and the link with the territory. Jean-Pierre Raynaud, Vice-President of Nouvelle-Aquitaine Region in charge of Agriculture, and Marco Remaschi, Regional Minister for  Agriculture of Toscana Region, further stressed the essential role of the human factor and the link with the territory in bringing to life otherwise marginal areas and preserving cultural traditions in places that would otherwise have seen depopulation and the disappearance of agricultural land, landscapes and production.

The Assembly of European Horticultural Regions (AREFLH) is a European association representing 20 EU regions and 25 Associations of Producer Organisations across 7 European countries. Its main missions are: to defend the economic and social interests of the fruit, vegetable and horticultural sectors in Europe; to foster exchanges of best practices, partnerships and joint projects between regions and professional organisations; to actively seek new solutions for the main issues affecting the future of the fruit and vegetable production in Europe.

The Association of European Regions for Products of Origin (AREPO) brings together 34 regions from 9 EU Member States and more than 700 associations of producers of Geographical Indications from these regions, equivalent to more than 50% of European GIs. AREPO aims to promote and defend the interests of producers and consumers in European regions committed to promoting quality agri-food products.

NEW ON MOVING BLOG: The EU CAP Network, the platform where MOVING contributions and the new CAP objectives can meet

NEW ON MOVING BLOG: The revision of the EU Geographical Indications system